Can you imagine living next to a factory farm with 10,000+ hogs?

That’s what a community in Muncie was fighting to stop–a massive hog CAFO approved by IDEM to be built within the Mississinewa River watershed and their residential community. The proposed CAFO would have had 10,560 “wean to finish” hogs in four production buildings, each with underground waste pits for collecting an estimated 4.2 million gallons of animal waste and process wastewater generated annually. The CAFO site was also dramatically ill-conceived because:

(2) groundwater on which area residents rely for their drinking is a mere 9” to 11” below the surface and, therefore, extremely vulnerable to surface contamination;

(3) the CAFO’s four waste pits will be built within the water table; and

(4) the CAFO site and its waste disposal sites are all within the watershed of the Mississinewa River, very near its tributaries including Holdren Ditch and Big Lick Creek which are already impaired waterways due to E.coli contamination from animal waste.

What DID HEC Do? 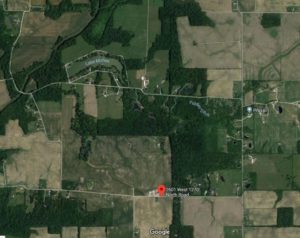 Aerial view of the CAFO site in relation to surrounding homes, waterways and Lake Mohee

HEC provided legal representation to several families who live near the CAFO Site. We brought an administrative appeal of the building permit issued by the Delaware County Zoning Administrator before the BZA and won. The Delaware BZA voided the building permit finding that it was illegally issued because CAFOs are not specified as permitted uses in the County’s “farm zone,” which contemplates traditional farms. The BZA’s decision makes sense given the purpose of zoning law–which is to protect the general health and welfare–and because the county “farm zone,” which was enacted decades ago when traditional farms were the norm, imposed a mere 200 foot setback from residences. In other words, the drafters of the “farm zone” could not have contemplated industrial CAFOs of the size and scale being proposed, much less believed that a 200 foot setback from where people live would protect general health and welfare.

The CAFO developer appealed and we intervened and joined with the Delaware BZA to defend its decision. The trial court, unfortunately, reversed the BZA’s revocation of the building permit, finding that an industrial-scale CAFO is somehow the same thing as a traditional farm for purposes of the zoning ordinance. Because we believe the trial court got it wrong given the purpose of zoning law, the plain language and history of the zoning ordinance, and evidence presented clearly demonstrating that CAFOs are not farms, we took the case to the Indiana Court of Appeals, which upheld the trial court’s decision. Even so, our efforts to galvanize the community and mount a rigorous legal fight ultimately resulted in Delaware County updating its zoning ordinance to include regulations of confined feeding operations and thwarting the CAFO developer’s plans.

Rethinking Our Approach to Climate ...