Take a look back at HEC’s Bill Watch 2021. Read details about key bills that we’re focused on during the 2022 Indiana General Assembly below, and please take action!

Oppose
HB 1063 – Oppose Effort to Allow More Undue Industry Influence Over Environmental Agency Decision-Making
HB 1063 would alter the standards that govern the way a trial court reviews the decision of an administrative agency. Such decisions include rulings of the Office of Environmental Adjudication (OEA) and the Natural Resources Commission (NRC) that are charged with reviewing administrative appeals of IDEM and DNR permitting and enforcement decisions. Under current law, a party who seeks judicial review of an OEA or NRC ruling has the burden of proving that the decision is unlawful, the evidence is limited to the administrative record, and the trial gives deference to the agency's on factual findings. This makes sense because it should not be easy to overturn the considered decisions of government agencies that have special expertise and are already subject to regulatory requirements. HB 1063 would change that by eliminating all deference a trial court gives to the agency, would allow new evidence to be introduced that was not before the administrative agency, and in enforcement actions, the burden of proof is shifted to the agency to defend its decision, instead of the current standard which requires the industry to prove that the agency's enforcement action is unlawful. These are dangerous changes to the judicial review process because they would allow regulated industries to exert even more undue pressure on IDEM and DNR to do industry’s bidding out of fear that industry will more easily prevail on judicial review. These changes would also turn administrative hearings into an empty exercise that must be repeated in civil courts because even the evidentiary record must be redone. Take action: tell your representative to oppose HB 1063.

Support
Climate-Related Legislation
The Purdue Climate Change Research Center has forecasted that Indiana will be subject to increasingly severe and frequent flooding, reduced crop yields, threatened infrastructure, and more.Indiana's lawmakers have a moral and fiscal obligation to protect Hoosiers from the increasingly higher costs of climate change on our people, infrastructure, economy, and environment. Senator Ron Alting (R-Lafayette) (in partnership with the youth leaders of the West Lafayette, IN-founded Confront the Climate Crisis) has introduced a climate resolution SCR 3 that aims to get lawmakers to formally acknowledge the key facts and key forecasts about climate change. Senator Alting has also filed SB 255 which would establish a Climate and Environmental Justice Task Force that would methodically assess how Indiana can accelerate the reduction in greenhouse gas emissions, the adaptation of the economy to climate change, and the development of a vibrant sustainable economy.TAKE ACTION: Ask your State Senator to convey to Senator Messmer, Chair of the Senate Environmental Affairs Committee, that Messmer hear SB 255 and SCR 3 in that committee.

Oppose
HB 1100 – Reducing state government authority to protect health and the environment
HB 1100 -- Agency oversight and rulemaking procedures -- would limit Indiana state agencies' ability to adopt timely and appropriate state standards to protect public health and the environment.  Besides adding new burdens for agencies in adopting and renewing their administrative rules, and expanding legislative involvement in the executive branch role in implementing state laws, the bill also includes "no more stringent than" language that would prevent the state from adopting any rules that are more stringent than corresponding federal rules.  This would eliminate our agencies' ability to craft environmental protection rules, for example, that are tailored to Indiana conditions and threats, or that fill in gaps where federal rules are silent.HEC and our allies have opposed "no more stringent than" policies for many years.  In 2016, the General Assembly amended IDEM's rulemaking procedures to require notice to the legislature any time the agency was proposing more stringent rules, and delay effectiveness for a limited time period while the legislature reviewed these rulemaking notices.  However, this legislation did not prohibit state rules that were more stringent than federal rules.   HB 1100, in contrast, directly prohibits more stringent Indiana rules, without defining the term or providing any flexibility to Indiana agencies to address Indiana-specific concerns and needs.Take action:Ask your state representative to oppose HB 1100.

Support
SB 412 and HB 1335 – Responsible Coal Ash Disposal
Indiana has been interpreting existing laws in a way that allows millions of tons of coal ash to be left in contact with groundwater and disposed of in floodplains. When coal ash gets wet, it contaminates water with toxic heavy metals. All the unlined coal ash disposal sites in Indiana have contaminated local groundwater with a variable mix of molybdenum, lithium, boron, arsenic, cobalt, antimony, radium, lead, selenium, and thallium. Leaving coal ash in contact with groundwater means the contamination goes on indefinitely. Getting it out of groundwater prevents contamination.Flood-prone areas, like the floodplains of Lake Michigan and our major rivers, are among the worst locations for coal ash disposal, yet the majority of Indiana's coal ash is currently disposed of in floodplains.The Indiana House and Senate will each consider bills to protect Indiana's natural resources by getting coal ash out of groundwater or out of the floodplain: HB 1335 in the House and SB 412 in the Senate.Take Action:  Please contact your state representative and state senator and ash them to support safe disposal of coal ash.

Support
HB 1334 – Property tax deduction for maintaining wetlands
Many people and organizations spent a lot of time in 2021 trying to stop a bill that reduced protection of wetlands. It's very refreshing this year to have HB 1334 that helps the state's remaining wetlands, instead. Representative Boy (D-Michigan City) introduced this bill to give property owners a tax break if they preserve the wetlands on their property. TAKE ACTION:Please let your state representative know that you support HB 1334, a tax credit for wetland preservation.

Support
Making Rooftop Solar More Affordable
Indiana enacted a very controversial anti-solar energy law (SEA 309) in 2017, despite broad-based opposition from an array of public interest groups, renewable energy companies, and tech CEOs. In essence, SEA 309 eliminates net metering, which credits solar owners, at the retail rate, for any solar electricity that they do not use on-site.
Since SEA 309's passage, lawmakers, on both sides of the aisle, are increasingly interested in ways to promote rooftop solar. In the House, that includes net metering legislation (HB 1136) and legislation to make rooftop solar more accessible for people who live in homeowner associations (HB 1196). In the Senate, that includes net metering legislation (SB 248 and SB 313).
TAKE ACTION:
Getting Committee hearings on pro-rooftop solar is going to be challenging, because the utility lobby and the builders lobby exert so much influence in the legislature. However, if enough Hoosiers speak up, this will change! Please ask your state representative and your state senator to a.) support Committee hearings on rooftop solar legislation and b.) ask them to convey that support to Rep. Soliday (R-Valparaiso) and Rep. Torr (R-Carmel) in the House, and Sen. Koch (R-Bedford) in the Senate.

Support
HB 1378 – Preschool and Childcare Drinking Water
Lead is toxic to the nervous system and is especially harmful for young children.  HB 1378 would require Indiana's preschools and childcare facilities to test their drinking water for lead and take action if the lead concentration is high.Take Action:  Please ask your state representative to support HB 1378. 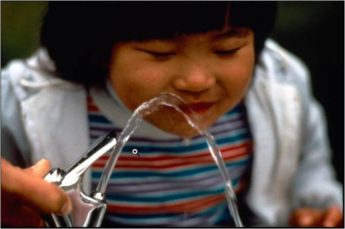